John Martin took over the Central Oklahoma baseball program in 2015 and in seven seasons, has totaled 213 victories for the Bronze & Blue, turning the Bronchos into a national contender.

Martin has a 213-129-1 record in seven years at the helm since taking the head coaching position ahead of the 2016 season. He reached 100 career wins in 2018 and did it in style, winning the final game of the regular season to not only reach the milestone, but also win Central Oklahoma its first MIAA Championship since joining the league in 2012.

Martin led UCO to four consecutive 30+ win seasons from 2016-19 and was certainly on pace to do so again in 2020. Martin had the Bronchos 17-3 overall, and ranked 12th in the country, when a global health crisis stopped the season in its tracks and ended what might have been a special year.

Martin has also led UCO in advancing to the NCAA Tournament Central Regional in each of the three seasons from 2017-19. UCO reached the regional finals in 2017 and 2019.

Central posted a 29-21 record in 2022, finishing fourth in the MIAA regular season standings. The Bronchos were eliminated from the postseason in the opening round of the MIAA Baseball Championship.

In 2021, Central Oklahoma won 25 games, finishing the season 25-21, and reached the MIAA Championship consolation finals after receiving the sixth-seed in the conference tournament and winning a best-of-three series on the road to advance to the semifinals. UCO went 1-2 there in wrapping up its season.

Central has had 23 All-MIAA selections under Martin, seven All-Region honors, and four All-Americans.

Martin took over the UCO reigns in July of 2015 after four years as head coach at Coffeyville (Kan.) Community College and led the Bronchos to a 30-22 record in his first season, with two players earning All-America honors.

John assumed control of the Coffeyville program in August 2011 and led the team to a school-record 33 wins during the 2012 season, earning Jayhawk Conference Coach of the Year honors.

The Ravens tied that record by winning 33 games again in 2013, set another record with a 38-18 campaign in 2014 and had 29 wins in 2015. Martin took the Ravens to four straight super regional tournaments, one of just two teams in the junior college ranks to accomplish that feat.

A native of Kansas City, Mo., Martin played one year at Hutchinson (Kan.) Community College before going to ESU and putting together a sensational three-year starting career at catcher.

John capped his college career by leading the Hornets to the NCAA Division II World Series as a senior and was a 24th round draft pick of the Los Angeles Dodgers in 2006. He played two years in the Dodgers organization and also played one season each for independent professional teams in Kansas City and Wichita.

Martin returned to Emporia State to start his college coaching career in 2008 as assistant coach, directing the pitchers and catchers. He helped the Hornets to a 134-42 record during his three-year tenure, including a national runner-up finish in 2009.

Martin also spent two summers as manager of the Liberal Bee Jays, a summer collegiate baseball team. He coached the team to a 42-13 record and the National Baseball Congress championship in 2010 when he was named NBC Manager of the Year.

John is married (Courtney) and has one daughter (Emmie). 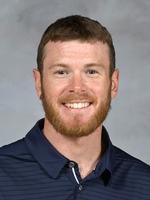 Clayton Blackburn joined the University of Central Oklahoma baseball staff in 2020 as a graduate assistant coach and assists with the Broncho pitching staff.

Blackburn is from Edmond, Okla. The 2011 graduate of Edmond Santa Fe High School was drafted in the 16th round of the that year's Major League Baseball Draft by the San Francisco Giants. Blackburn played 10 years of professional baseball with the San Francisco Giants, Texas Rangers, and Cincinnati Reds, twice earning a call up to play for the Giants in 2016 and for the Rangers in 2017. Blackburn threw over 750 innings from rookie ball to Triple A. Blackburn threw over 300 innings in Triple A for both Sacramento and Round Rock in the Pacific Coast League. He won 47 games in his minor league career, including 23 in AAA.

In high school, Blackburn earned All-City and All-State honors from The Oklahoman after posting a 10-1 record and a 1.37 ERA as a senior.

Blackburn retired during the 2019 season and went on to coach baseball for one year at Westmoore High school.

He is married (Ashton) and has one son (Benjamin).